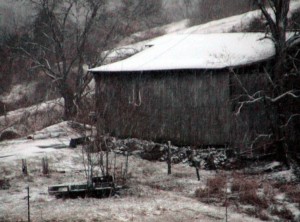 I’m not sure what’s been going on with me the last few weeks, but I wonder if the cold weather has sucked all the words from my brain. I’ve thought about writing for this blog so many times in the past week, but nothing seemed to come to mind. And it wasn’t just for the blog; I wasn’t making much headway in writing at work, either. I tried to write but didn’t feel inspired, and what I did write I felt was just awful. This has happened to me before, so I’m not to worried.

But isn’t this cold something else? I remember in 1994 (I think it was) when the air temperature was -22 degrees. We’ve been working at making sure the birds have something to eat and that other creatures in our neighborhood are taken care of. Saturday was relatively warm, and after the past polar vortex temperatures, I’ve never heard the word “balmy” used so often to describe 32 degrees. My mom gave me the sage advice of letting the water run in a sink that is on an outside wall and letting my car sit a few minutes with the lights on before starting it when it’s so cold. I hope it works tomorrow! Although OSU has cancelled classes, staff and faculty are to come in as scheduled. After seeing all of the students walking around in negative wind chills, without hats and gloves and coats undone, that’s probably wise! I, on the other hand, will be wearing many, many layers.

Chris O’Leary spotted a red fox while walking his dog in the park late at night about a week before Christmas. It was walking on the path just east of the Indianola underpass. It froze when it realized he was there and then ran back towards the bird mural. I’ve seen a few foxes, and they are so beautiful. It must have been quite a sight in the snow.

NRP had a nice audio story on daylighting. You can link to it here.

Cornell University has a great website, eBirds, that lets members record the birds they find and keep track of bird lists. And all of this helps contribute to science and conservation efforts.

And finally, even though the thought of flowers blooming seems a distant dream, researchers are working on ways to reduce the use of pesticides that might be harmful to honeybees, which are an important form of pollination for US crops.

Well, I hope you all stay warm over the next few days.