A Week of Firsts

Well, it’s official. Summer is over. I know, I know, summer is supposed to last until September 21, 2013 (and my brother always contends that July 4th was the last day of summer). But as I wa 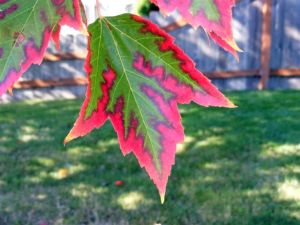 s walking from my car into our house, I saw it, that harbinger of fall, a tree that was changing color. Pete said it was probably stressed, but then I saw another one. Granted, both were maples, but there it was, atop of several branches, a hint of scarlet, a touch of yellow, a modicum of orange. The end of summer and the beginning of fall. Sort of…

Pete and I also saw our first monarch butterfly yesterday afternoon in our backyard. Pete was so happy that we finally had one show up after such a long time without seeing any. We’ve tried hard to put in plants that will attract birds and butterflies. It was strange; I hadn’t really noticed the lack of monarchs until someone mentioned that they hadn’t seen any this summer – which is now officially over. I remember about ten years ago, Pete and I went a little bit south of Columbus to visit a few Ohio prairie remnants. Usually, these remnants were associated with small cemeteries such as Smith Cemetery and Bigelow Cemetery. One of the cemeteries was literally out in the middle of endless fields of grains a small oasis of green. The plot of land, about 1/2 acre, had tombstones and some tall trees. There was a path that meandered around the edge of the remnant, and as I came closer, all I could see was monarchs. On the trees, on the ground, in the air. I could walk, very slowly, and hundreds of butterflies would gently lift up as I passed by. These must have been thousands of them.

Speaking of native plants, Pete and I went off to Lowe’s for some things needed for our various projects around the house. I always head to what I call the sad plants, those that have been reduced in price for many different reasons: pot-bound, leggy, or som

etime, for no reason that I can see except they have been sitting around for too long. I had bought a few plants for my front garden, and wanted to see if there was anything else good left. There wasn’t anything I saw, but I brought Pete over to see all of the native plants that were discounted: blazing star, nodding onion and blue flag irises. The containers extolled the benefits of natives plants, how they thrive in all the weather conditions that Ohio can throw their way. We have plenty of blazing star and nodding onion, but Pete was thrilled to bring home six iris plants for our water garden. He’s been working hard on rearranging the plants in a way that looks natural but good.