After yesterday’s storm, I believe Shakespeare’s King Lear got it right. The winds were certainly raging yesterday. I hope that all of you survived with homes and health intact. Pete had given me a call at work, letting me know that a line of bad storms was heading our way. I took a look at The Weather Channel online and rushed downstairs to tell my co-workers that they needed to head home. The sky looked a little dark, not too bad. That rapidly changed as I drove home, about a ten minute drive. When I pulled into the driveway, Pete was pulling potted plants into the garage. We managed to switch out the cars so mine was protected by the house before all hell broke loose. I’ve been through a tropical storm and three tornadoes. I’ve never been so scared as I was yesterday afternoon.

The trees were bending sideways, R 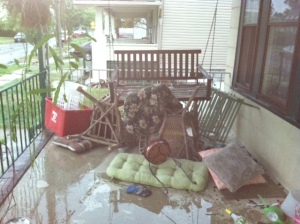 umpke containers were racing down the street, and transformers were flashing. We were trying to save the plants on the front porch, bringing them inside as quickly as we could. Once the porch furniture began to fly across our porch, I told Pete to get inside and stay away from the windows. (You can see the end result of the wind in the picture.) I kept expecting the power to go off, but with only a few flickers, it stayed on; we are so thankful for that. Our neighbors across from us are without power as are some others we know nearby.

After the storm was over, I walked around the neighbor

hood, taking in the damage. The box elder up the street lost a large limb and is most likely beyond saving. The silver maples were split, limbs everywhere. This picture was taken in the alley behind our house. We saw few oaks down, a testimony to their strength. The large pin oak down the street was fine, and it is probably the largest tree in our neighborhood.

Today, we went out to run some errands and saw trees down everywhere along with 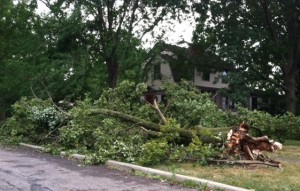 power lines. Most of the trees were silver maples like the one in this picture. Down by the Ohio State Med Center, where construction is going on, I marveled that the cranes, so high up, were still standing. With the Dispatch reporting 82 mph winds at Don Scott Airport and power outages all over Central Ohio, I have no idea how they managed to stay intact when billboards were flattened and awnings ripped to shreds.

Again, I hope that all of you managed to weather the storm in good health. If you have pictures or stories to tell about your experiences yesterday, please let me know. I hope that this isn’t how our weather will be in the future. Pete believes this is a harbinger of things to come because of global warming. OSU professor Lonnie Thompson would agree, as this article shows. Just another reason to plant more trees and do whatever else we can to protect our planet.

One response to “Blow, winds, and crack your cheeks! rage! blow!”