It Takes A Community…To Create A Mural

Saturday morning, Pete and I headed down to the underpass in Glen Echo, the one that will turn into the beautiful bird mural. The purpose of our trip was to help prime th

e bridge for the painting that Clint Davidson, the artist, would hopefully begin today. To be honest, I wasn’t sure what kind of a turnout there would be and got a little worried as we approached, not hearing any voices. Well, I needn’t have worried (the bridge apparently acts like a huge sound absorber!) as once we got closer, there were plenty of people already working. There was food donated from great businesses in Clintonville, including Mozart’s Cafe, Pattycake Bakery, Clintonville Community Market, and Crimson Cup Coffee (thanks, everyone!). Kids in the neighbors had a lemonade stand with all the proceeds going to help pay for the mural. It really made me glad to see so many people coming together to do something so wonderful. We also had a lot of people just walking through the park stop by and ask us what we were doing. 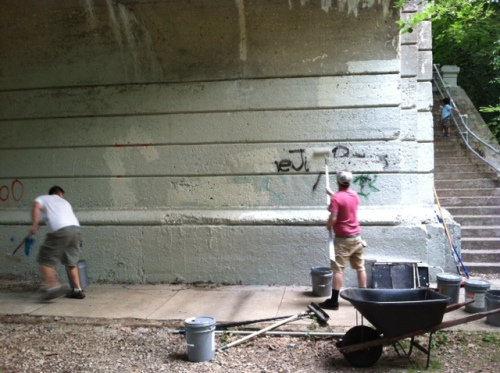 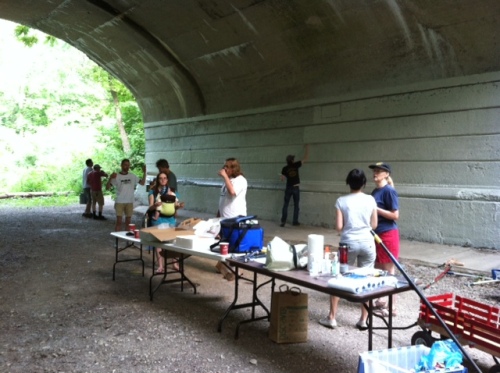 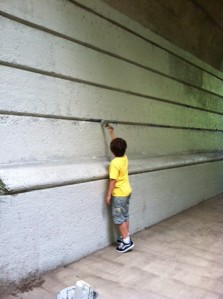 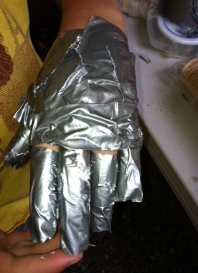 The job went much faster than I ever thought possible. But I must admit, the painting was quite different from any I’ve ever done — and not the sort my very neat and clean painter mom would condone! There were no drop cloths, no painter’s tape, no worries about drips and runs. It all went very well with the exception of a few millipedes who were hiding in the crevices that managed to get some paint on them. Pete, of course, rescued them all. We even had several kids helping out, one who was rather creative in his technique for keeping the paint off of his fingers! The worst part was trying to paint in the parts that were filled with dirt; we just did our best!

In the end, we had a lovely blank canvas for Clint to begin drawing in the sketches of the various resident or migratory birds. I can’t thank you all enough for the help and support you’ve shown to make this mural happen! And I can’t wait to post updates on how the mural is progressing. I know it will be beautiful to see.