Sorry for the lack of posts. Been dealing with a family crisis that has made me just want to come home and turn into broccoli.

It’s hard to believe this weather. Today I was scraping frost off my windshield; two Sundays ago, Pete and I spent a good chunk of the night in the basement, listening to the tornado sirens going off. We managed, this once, to get all the cats into the basement, too. Mouse usually will hide because she knows something is up whenever the weather radio goes off. I’ve never seen

so much rain come down so fast. Our entire back yard was under water for several hours. And the hail…I was thankful that with the way the hail was coming from the east, most of the tender shoots in my side garden were spared. (I had a video of the hail that I wanted to post, but I’ve not figured out how to get the video right side up…looking at cars upside down is disconcerting at best…) I wondered what had happened in the ravine, so Pete and went down for a walk in Glen Echo. The scene was horrible; the debris line was about two or three feet abov

e the banks. The photo above doesn’t really show how high up the debris was. Plastic bags, bottles, leaves, all were stuck in the bushes and trees along the water. There was a tree trunk, about two feet in diameter and about 20 yards long that had been pushed up against the little bridge. The two bridges had spots on them where the water had eroded the blacktop away. There was also a lot of erosion on the banks; you could see where the water had pushed the soil away. 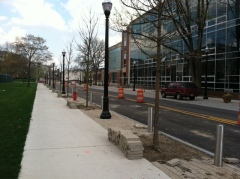 nting even more trees along 17th Avenue. I started to count the trees and gave up when I hit 40. I saw red, white and burr oaks, common hackberry and a few others I didn’t recognize. That street is going to be something by the time I’m ready to retire in less than ten years! (Not that I am counting the days until March 3, 2022…)

Mama and Papa Finch are back nesting in the ferns. I am so worried that the sparrows will hurt the eggs or chicks again. It was so traumatic for me last spring when we lost two nests in a row. Pete said that even nesting boxes wouldn’t help as the sparrows can still get in. I guess we can only watch them as best as we can and hope the sparrows play nice. Otherwise, there will be more trips to the Ohio Wildlife Center with baby birds in hand.

Finally, Earth Day is coming up on April 14th and 15th. We’ll have events going on in Glen Echo. When I get more details, I’ll pass them along.

Well, that’s about all that I have for now.