I’ve mentioned in the past that I live with four cats: Fionula, Seamus, Maeve and Ciara. (You’d think I was half Irish, wouldn’t you, with those names!) Seamus is mostly Pete’s boy, whilst Maeve and Ciara fight over my attention. Pete has told me numerous times that Maeve and Ciara get along fine until I come home. So the occasional hiss or growl by Ciara (Maevie is mostly blissfully ignorant of the trouble she creates) isn’t cause for too much alarm.

A few nights ago, the situation got a bit out of hand with Ciara’s growling. Normally, I tell her to hush, and she slinks away. This time, she just kept growling, so I went and picked her up to place her under the covers, a special treat. She just kept growling. I couldn’t figure out what was wrong with her, especially when she jumped up from under the covers and ran out into the hall. A 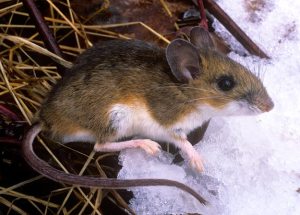 gain, more growling. After about an hour, I had had enough, what with it being 4am. I got up, turned on the hall light, intending to ask Ciara just what her problem was. I saw she had something white in her mouth and thought it was a cotton ball, a favorite toy of hers. Then I realized that the little cotton ball had a tail. And whiskers. And very wide, very frightened eyes. I yelled at Pete that Ciara HAD A MOUSE and he needed to come here RIGHT NOW!!! Or as Robert Burns would have put it, Ciara had a “wee, sleekit, cow’rin, tim’rous beastie.”

Grabbing Ciara by her scruff, the mouse was let free to run to the steps downstairs. I was tossing cats (not literally!) into bedrooms and bathrooms to keep them away from the poor creature. (Seamus and Fionula had no interest whatsoever in getting up from their warm beds; only Maeve and Ciara were running around.) Cats secured, I looked for a container to put the mouse. Found a shoe box, gave it to Pete, who managed to get the mouse into the box. Except it was one of those shoe boxes with a finger hole to grab it from the shelf. Mr. (or Mrs.) Mouse promptly found the hole and jumped out. New box found, without a hole. Mouse caught once again. Then what to do with the little cutie-pie? Of course, he/she needed some bedding to feel safe in his/her temporary home. That meant opening the lid and yes, you guessed it, the mouse jumped out. We’d managed to get it into a room with a screen and spent the next 45 minutes trying, in vain, to recapture one very soggy mouse. (Ciara seemed only interested in carrying the mouse around, thus the saliva-covered fur…)

This mouse lead us on a merry chase, jumping on the walls, on me, and finally, discovering a hole in between the flooring and wall (we only have lathe on the walls right now) and was gone like a shot. We want to think that the mouse has found his way back outside. But through all of this, I just thought how sweet that little mouse was, and, how relatively calm, considering!

*”There’s a mouse loose about the house.” (Listen to Burns’ poem, “To a Mouse” and it will make more sense! Read the original and English translation here.)

One response to “There’s a Moose Loose Aboot the Hoose*”