Two cities in Ohio, Coshocton and Newark, are working with two very different forms of alternative energy and fuels. Niama-Reisser, based in Coshocton, Ohio, is working on a high-mileage car that  is capable of 200 miles per gallon. Yes, you read that right: 200 miles per gallon. I don’t pretend to be an engineer, but from what I understood, the engine runs on some sort of centrifugal force.

Now, what I know about centrifugal force wouldn’t fill a thimble. My only experience was a mad scientist experiment that I did in 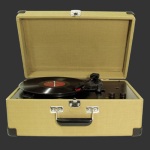 elementary school which involved placing a plant on a record player (that shows my age!) and sending it spinning around. Since the turntable was on its side (I’ve no idea why that was), the whole rotation took on a rather lop-sided turn.  I think the whole idea was to see how the plant would be affected by spinning on its side. However, the length of the experiment didn’t allow much time for the plant to grow, and I think the poor plant was traumatized by constantly falling off the turntable; there’s only so much hold to duct tape.  I think I got an “A,” most likely because the teacher felt sorry for me! But I digress.

The car itself is cute, although I admit, that probably isn’t an adjective that will make all the car-crazy men go rushing out to buy one. But 200 miles per gallon from a diesel engine is pretty darn amazing. I hope this car is on the market soon. Our Toyota gets pretty good gas mileage but no-where near 200 mpg!

The other city, Newark, had put out a request in April for bids for companies to use solar power to run the city’s waste-water treatment plant.  The best part (besides how happy the Earth will be with this clean energy) is that much of the products and work done will come from Ohio companies, creating Ohio jobs.  This is such a wonderful idea. No matter how you feel about global warming (something I believe in), solar energy is better than coal. Coal burning plants place so many chemicals into the air (mercury, sulfur dioxide) that aren’t healthy for anyone to breath in.

And the trees that we will be planting in the arboretum will also help the planet by cleaning up our air and water. It’s all good.

Until next time…and have a happy Fourth of July!