This past weekend, Pete and I were working in our respective gardens. His garden is in the back and is full of native woodland and prairie plants. My front garden is a more traditional garden, with some natives but mostly non-native plants. My philosophy on gardening is this: I buy a plant that I like; any plant that comes back the next year and lives through the whole growing season is a good plant, one that I will buy more of. Of course, remembering what the name of the plant is is another story.

I had been expanding the front garden a little bit, taking out the grass. In working the soil, I came across the usual insect larvae (not doing so well with all the rain) and bits of clinker coal from our house’s original furnace. The occasional odd stone would turn up, too. I found one that looked like flint, and put it aside to look at later. Of course, I immediately forgot that I had it.

After we had finished working, Pete came in with something to show me. Turns out, it was a piece of flint that he thinks was used as a scraper. It fit so perfectly 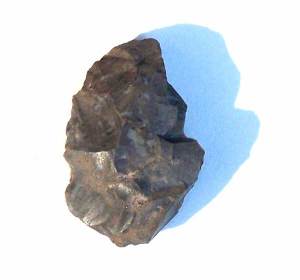 in between his thumb and forefinger, so it might have been used for delicate work. That reminded me of my stone, which I brought in and washed off. It too, was flint. We think it was also used as a scraper, but more to burnish the hides. It has one side that is perfectly flat. I remembered as  a kid hunting for arrowheads in my uncle’s fields near Canal Fulton, Ohio. I only found a few, but it was very exciting when one turned up.

Finding the flint made me curious about the Native Americans that would have lived in Central Ohio. I did a little research on the Internet and found out that the Olentangy River (the closest river to our house) was originally called keenhongsheconsepung, a Delaware Indian word translated as “stone for your knife stream.”It was named this because of the shale along its banks. Further investigating showed me that Mingo Indians had settled along the Scioto River in downtown Columbus. So at this point, I am unsure what tribe might have made the scrapers. If anyone has more definitive information, please post a comment to let me know.

I wonder what Ohio would have been like for these Native Americans, before the land was settled, how the trees and plains would have looked. Pete and I have

traveled to some of the remnants of prairie still left in Ohio. The plants are very amazing to see  with roots that went very deep to survive fires and droughts. Many were taller than I was. We’ve also gone to a few of the old growth forests in Ohio with trees so big that Pete couldn’t even get his arms around them. You look up, and the branches seem to go on forever. And the stories those branches could tell us if we knew how to listen…

3 responses to “Native Americans in Columbus”