Ever since I went off to college in 1980 (now you can all figure out how old I am!), I’ve talked to my mom nearly every Sunday night. It all started because the dorms at Ohio State had a phone that could only be used to make local out-going calls, no long distance. Yes, this was way before cell phones became so popular! In order to make sure I was there when she called, Mom and I settled on a time of 7pm for her to call. The time might change, but on Sunday night, Mom and I usually talk on the phone. 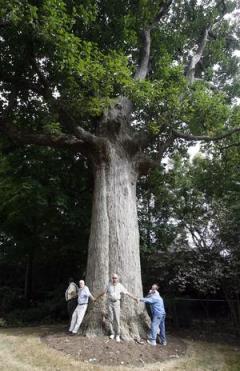 This last Sunday, when my mom called, she was so excited about an article that she had read in the Canton Repository, her local paper. When I heard her story, I was excited, too. It seems that the world’s largest magnolia acuminata, or cucumber tree, is located in northeast Ohio in a gated community in North Canton, Ohio, just down the road from my mom’s house in Louisville. She read about the tree in the paper and knew I’d be interested. After I got over my shock of there being a gated community in North Canton (and if you are familiar with the area, you will understand my wonder), I asked Mom to tell me more. This magnificent tree is a whopping 432 years old, stands 94 feet tall, and has a circumference of 290 inches. That means it’s about as tall as a 9-story building, and the picture shows that it took seven men to circle it. So that tree started out its life in the year 1580. In that year, the Billy Mitchell volcano on the island of Bougainville had a catastrophic eruption and Henry I, the King of Portugal, died with no direct heirs, causing a secession crisis. Strangely enough, I have read so much about WWII battles on the island of Bouganiville and don’t recall hearing about an volcano. Learn something new everyday!

Also, while at the Glen 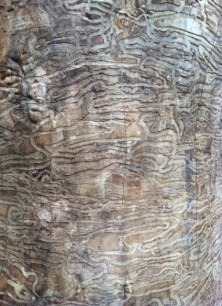 Echo Birthday Party, I saw an ash tree that had been killed by the emerald ash borer. The amount of damage that those beetles did was amazing, such devastation that I took a picture of it. I read in The Dispatch that ash trees are very important to Cedar Bog Nature Preserve. They provide shade for several species of Ohio orchids and flowers, both common or rare and endangered. In order to fight the borer, non-stinging wasps are being released in the bog. Three species are being released that attack the beetles in different stages of their lives. It’s hopeful that these wasps will be able to save future trees as some trees are already showing signs of damage.

And only in Clintonville… 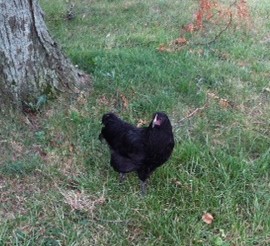 I saw this little girl on Indianola, as I was walking back from the thrift store…someone walking along behind me said that she has seen two chickens around the area for the past two weeks or so. Chicken Little was looking for her meal and managed to make a snack out of an ant or two. I told her she would be famous in my blog!

Only in Ohio indeed!

3 responses to “Only in Ohio…”